Mr. Chen, CEO from Ginkgo (at the right part of above picture), Mr. Lin, general manager from Ginkgo and glitter powder made of environmental glitter film. 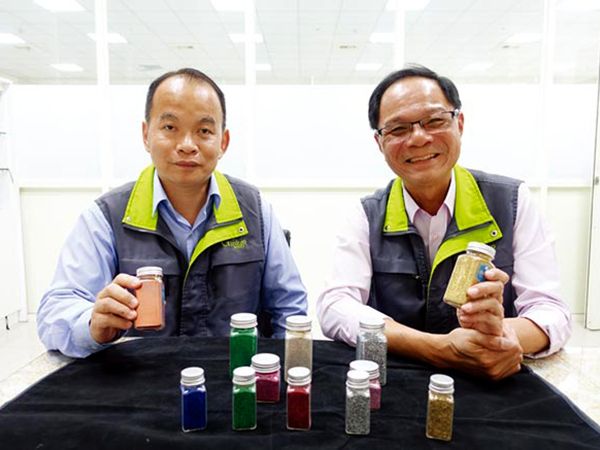 Mr. Chen, CEO from Ginkgo (at the right part of above picture), Mr. Lin, general manager from Ginkgo and glitter powder made of environmental glitter film.

Evaporation industry used PVC, OPP and other plastics in early stage, and using plastic films (PET polyester film, etc.) as substrate instead. How to keep environmental protection and economic development coexisting in harmony is the massive challenge for evaporation industry. At present, the glitter film is readily available in daily life and is made into sequins and glitter powder after cutting-up. It is widely used in printing, clothing, stationery, creation and other appearance decoration. Especially during the Christmas season, when the glitter powder (shimmering powder) is heavily used, a lot of micro plastic pollution will be created.

To avoid the environmental damage of plastic glitter, through the long-term cooperation with Industrial Technology Research Institute, Ginkgo overturns the producing process, adopts the biodegradable material (film and paper), and develops the eco-friendly glitter films (powder and sequins). Currently, Ginkgo has acquired the patent license, number M586675 issued by Intellectual Property Office. The structure of glitter film, developed by Ginkgo Film Coating Technology Corporation, can not only bring the visual enjoyment but also prevent causing the micro plastic. Biodegradable glitter is both harmless to the environment and the green material proved by practical testing.

The main characteristics of the eco-friendly glitter are as below: